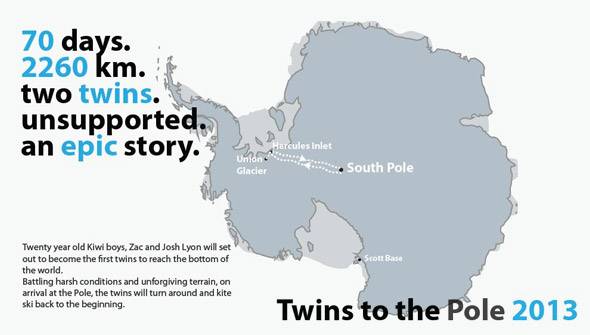 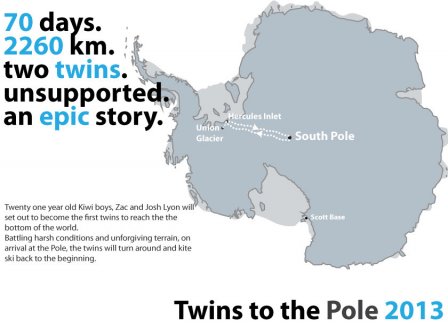 "Zac and Josh are a pair of amazingly ambitious individuals. This expedition, a world first, epitomizes the very values of daring, adventure and courage instilled in New Zealand’s history by the likes of Sir Edmund Hillary and Sir Peter Blake.  Hard work, preparation and world class training will see the boys in good stead to accomplish this amazing feat of endurance."

“Antarctica tests your preparation, mental toughness, and teamwork like no other place on earth. Josh and Zac's commitment is inspiring and their attitude is contagious. You might not be able to push their sleds, but you can certainly get in behind the campaign!”

“Josh and Zac, in the spirit of Hillary and Dingle, are taking on an incredible polar challenge and I really admire the way they are focusing on it so single-mindedly. It takes plenty of guts and determination (and a little crazy!) to get to the South Pole and these guys have it in spades. To trek across Antarctica! Who wouldn’t want to be part of this adventure? They'll do all the hard work what they don't have is money. So give them your support. Then jump on the back of the sled and get ready to go for the ride of your life!”

In November 2013, at the beginning of the Antarctic summer, twenty-one year old twins Zac and Josh Lyon will begin skiing alone and fully self-sufficient for 70 days in an attempt to be the youngest and first New Zealanders to ski from the Antarctic coast to the South Pole and back again.

The boys will complete the journey under their own steam, using a mixture of skiing, walking and kite skiing to achieve this epic feat of endurance. Battling gale head winds, blizzards, crevasses and slow starvation, Zac and Josh will really be against the clock, having to make the last plane out before the Antarctic winter.

The history and legacy of Amunsden, Scott, Shackleton, Hillary and other polar adventurers will stand the test of time. Antarctica may not. Climate change is a very real and current issue in today’s society, however it is widely misunderstood. Zac and Josh will record the evidence they witness first hand on Antarctica and the Arctic Circle.

They aim to inspire the younger generation of New Zealand and the world that anything is possible and wiith enough hard work, commitment and motivation they can achieve their dream and ‘be the change’ they want to see in the world.

To make this happen, the twins need to attend a polar training course held in Norway. This is run by experience polar guides and will teach the essence of polar travel and surviving in such hostile conditions. The money raised from this project will also help them to cross the Greenland ice cap, a mini expedition, putting all the learned knowledge into a final practice run before the Pole!

Any additional funding over the target will be used to fund step two of their plan.

By completing this expedition Zac and Josh aim to: 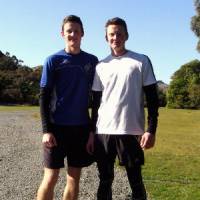 "Hi guys, thanks for visiting our profile! Josh and I are really excited to have your support on this epic adventure. About us... Well, we are both currently in our final year of study at the University of Waikato. We are both studying earth science, ..."